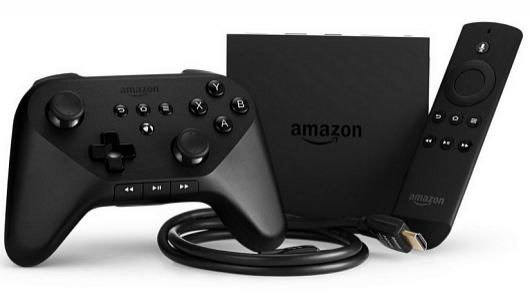 Amazon’s Fire TV recently gained more features. Here’s what’s new and how to make the most of the updates

When we first reviewed Amazon’s Fire TV and Fire TV Stick, both had plenty of features that make them viable contenders in the streaming device market. Last month, Amazon launched significant updates that bring new features to both Fire TV devices. So let’s take a look.

Amazon’s Fire TV set-top box has a lot of power under the hood, which makes it a viable gaming machine for casual gamers. But you’ll likely find that the included 8 GB of internal storage is simply not enough space. Previously the USB port on the back of the device was locked down and couldn’t be used for storage devices, but thanks to the recent updates, additional storage space can easily be added via a USB flash drive. Note that this update is for the Fire TV box only.

For best performance, Amazon recommends using a USB 3.0 flash drive that’s 128 GB or smaller, and external hard drives are not supported. When you plug in your flash drive, depending on the type, you might see a message that you need to let Fire TV format it to FAT32, as shown in the screenshot below. 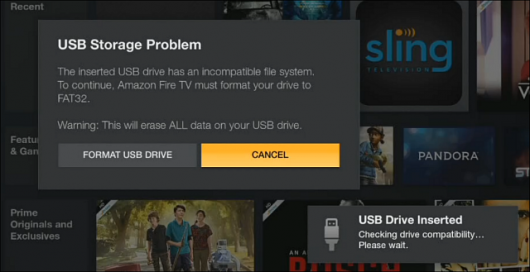 It only takes a couple of seconds to format the drive, and when it’s done, go to Settings > About > Storage and you should see the extra external space listed. 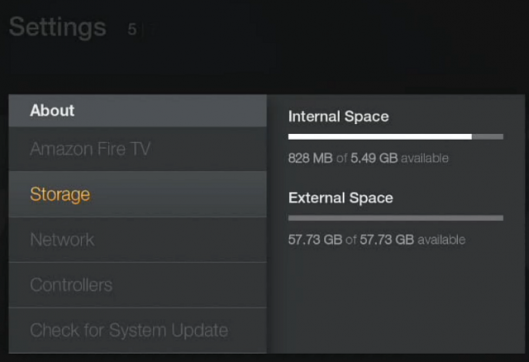 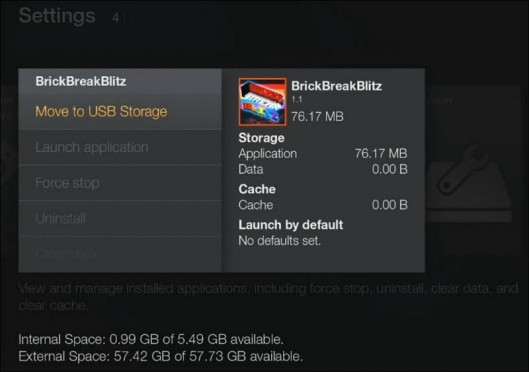 This feature, which is also only available for the Fire TV set-top box, allows you to keep enjoying content after everyone has gone to bed. To pair your Bluetooth headphones, go to Settings > Controllers and Bluetooth Devices > Other Bluetooth Devices. Power on your headphones, put them in pairing mode and wait for the Fire TV to detect them. Once pairing is complete, audio from the movies, music, or other content will be routed to your headphones instead of the TV. 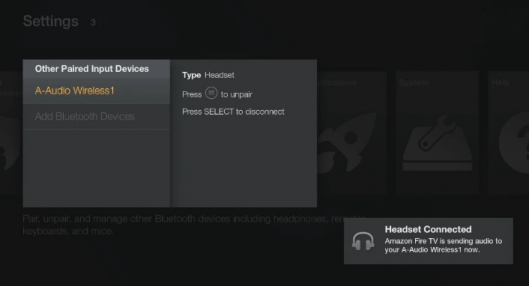 If you’re an Amazon Prime member, you can now subscribe to curated playlists that are based on your mood, type of activity you’re doing, artists and genres, or a music decade. This feature is available for the Fire TV and Fire TV Stick. 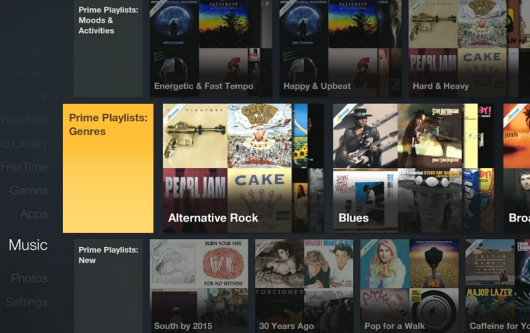 Another improvement is a new shortcut menu that lets you put your Fire TV to sleep, enable display mirroring or access settings. Just press and hold the home button on the remote for the onscreen menu shown below to pop up. This feature works on the Fire TV box and the Fire TV Stick. 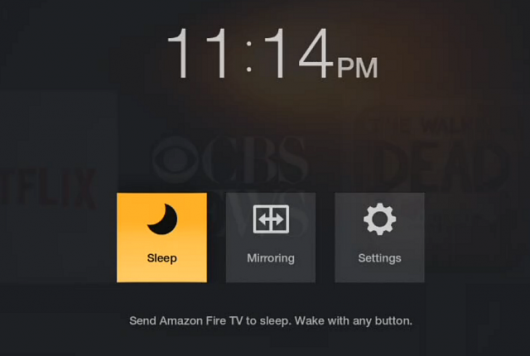 One of the more frustrating things about the Fire TV is the integrated app store: Amazon chose to highlight some apps through lists and recommendations, but it’s impossible to find others. Luckily, there is another way: You can always just go to Amazon’s website and either browse all Fire TV apps, or search for what you are looking for, and then remotely install the app directly onto your Fire TV or Fire TV stick.

Amazon’s Fire TV allows you to display any photos or home movies you have uploaded to Amazon’s Cloud Drive. But what if you just want to look at photos on your phone or maybe play a longer movie saved on your computer’s hard drive? That’s where local media sharing apps come in.

There are just a handful of those apps available for Fire TV, but these two should help you with most of your needs: Allcast offers an easy way to beam photos, videos and even music from your phone or from sources like Google Drive to your Fire TV. You can download the Allcast app for your Android phone on Google Play, but you’ll also need the free Allcast receiver app for your Fire TV, which can be remotely installed on the device from Amazon’s website. Once that is done, Allcast will automatically launch the receiver app whenever you want to start sending media, meaning that you won’t have to bust out your Fire TV remote control to get things going.

For a more powerful solution, you should check out Plex. It’s a media center app that catalogs your media and presents it on your Fire TV, complete with a nice user interface with cover art and more. Plex relies on a server application that you’ll have to install on your computer, but it’s definitely the way to go if you have a large personal media collection. Plex apps are available for Android, iOS and Kindle Fire, and the Fire TV app for Plex can be installed directly on the device or through the Amazon app store.

Another way to quickly get content on the Fire TV is to mirror your screen. Fire TV supports Miracast mirroring, which is also supported by Android devices as well as select Windows PCs and Amazon’s own Fire TV tablets and Fire phones. To make it work, you’ll first need to go to Settings – Display & Sounds and then select “Enable Wireless Mirroring,” and then start mirroring on your Android device (instructions here) or Kindle Fire (instructions here).

4. Use Airplay with your Fire TV

Owners of iOS devices or Mac OS X computers don’t have to feel left out when it comes to mirroring: The AirPlay & DLNA receiver Pro app, which is available on the Amazon app store for $4.99, turns any Fire TV into an Apple TV-like AirPlay renderer. This means that you can mirror your Mac’s desktop or your iPad’s or iPhone’s screen on your Fire TV.

You can also use AirPlay directly from some iOS apps, but your mileage may vary: Sending audio to your Fire TV should work fine, but you should expect some difficulties sending video from apps. Also, performance of AirPlay mirroring may vary based on your Wi-Fi network and other circumstances, so this may not be the best solution if you want to stream videos from other websites, but it’s still a great way to quickly beam a presentation, or maybe some photos, to the TV screen.

Amazon now offers a bunch of apps for the Fire TV, but technically, the device would be available to do even more: Fire TV is based on Android, and thus able to play almost any Android app, provided that it doesn’t need touch input and that it can be used with a TV remote control. Loading apps from third-party sources, which is also known as sideloading, is a little more complicated that on some other devices, but still feasible for more adventurous users. Sideloadfiretv.com has some good instructions on how to do it.

However, there are a few things to consider when going down this route: First, you’ll want to make sure to only get Android apps from reputable sources, and be aware of legal grey areas. Google Play doesn’t offer users a way to download apps to their PCs or Macs, which is why many who are interested in sideloading rely on apps hosted on other sites instead. You may violate copyright laws by downloading apps that are republished without the consent of the original developer, and apps downloaded from unknown sources could potentially also include malware code. However, some developers have decided to make their apps directly available from their websites. This includes Kodi, a media center app popular with users looking to customize their Fire TV experience, which can be legally downloaded from the Kodi website.

Also, sideloaded apps don’t show up on the Fire TV home screen. Instead, you’ll be able to launch them by going to Settings — Applications. Or you could instead install a custom home screen replacement like the FiredTVLauncherthat lists anything you are installing from other sources. And no worries, you can always go back to the Fire TV home screen in order to browse Amazon’s movies and TV shows.